A trip to the hairdressers can be one of two things. It can be a wonderful experience that improves your mood, increases your self esteem and makes you feel fanfookintastic (or) it does the complete opposite.

Why does our hair mean so much to us ?
Why does a bad hair day effect our mood ?
Why does a tragic hair style devastate us ?

Today, is the perfect day to explore this because I now have a hair cut that makes me look like Lloyd Christmas (Dumb and Dumber) and Bubbles de Vere’s (Little Britain) love child. I’m sure my trauma will bring you all a giggle.

Feeling fat, frumpy and frizzy, I decided to treat myself to a new hair doo. Fairly confident that I was gonna walk out feeling like a new woman.

Instead, I felt a little agitated from the get go. As the young lass began to tell me all about the date she was going on. With a nice young man who was gonna pamper her with love. She hit a soft spot because I miss spending time with the man I love.

But I listened attentively, praising her for not settling for anything less than she deserved. Then watched as she proceeded to chop the length of my hair off, without even blinking an eye.

I asked for the funky spiked look with feathery lengths down my neck. I even showed her a photo of the style I wanted

“No need to panic Tracey, you were contemplating a shorter style anyways, so just flow with it ” I told myself.

So, I browsed through some images to find a shorter hairstyle that appealed to me. And found this sexy Stone number.

Although the hairdresser started to focus a little more attention on what she was doing and what I wanted. She continued to tell me a little more about herself, which was starting to annoy me because I was making no further enquiries.

To be honest, I haven’t been in a very sociable mood lately and didn’t want to engage in conversation, especially small talk. I just wanted to sit in silence.

“Why won’t she just shut the fuck up” I thought to myself. “Don’t be so rude, she’s just being friendly” I rebuttled.

Gazing into the mirror, I watched as she created a hair style that looked nothing like the picture I had shown her AGAIN, which only annoyed me more. 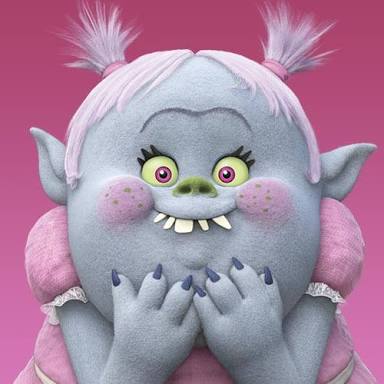 The blow dry made me look like a fuzzy wuzzy troll, which I’m sure my sisters would have found amusing. Because not so long ago they introduced me to Bridget from the “Troll” movie. A character with whom I share a few things in common … apparently 🤔

But all this was doing absolutely nothing for my self esteem. I felt worse than I did before I went in, which began to upset me. Throughout the entire hair cut I had openly expressed my displeasure and concerns. Doing my very best to flow with the fuck ups, but when the ordeal was finally over, it all became TOO much.

Yup, I was that over sensitive woman tearing up in the salon. But not wanting to make a scene, I fought back the tears and said that I needed to get out of there. So the lass in charge told me I didn’t have to pay today. Suggesting we make another appointment for next week to fix it up. “Just let me get out of here before I make a complete fool of myself.” I thought.

Once out of there, the flood gates starting to come down. And there was nothing I could do to stop it. Standing on the escalator, the tears began to flow.

For the love of God I’m crying in public AGAIN and I look like a fat fuzzy troll.

All the way home in the car, I cried and cried and cried. The kinda tears that come from the guts. Heart wrenching wailing that felt like I was birthing something … the RELEASE !!!

Hmmmmm … I thought to myself 🤔

It was only a friggin hair cut !!!

Why the heck did it feel so traumatic ?
Was my upset really about the hair cut ?
What if it was a catalyst for the release ?
What had I learned from this experience ?

As I pondered over the questions, I soaked my sorrowful self in the tub. My very own pity party in the bubbles as I wallowed in the depths of my emotions.

Allowing what ever flowed to surface

Truth is, it’s all about the growth: Releasing some more unhealthy attachments, having a good soulful cry and giving birth to new aspects of self.

So, I got out, stood infront of the mirror and assessed the damage. Not sure I wanted to go back to the salon and “fix” the mess. I wondered if I could just avoid mirrors for the next 3 months.

I had a play around with some hair products and straighteners. And as usual, it’s not as bad as it seemed. I’m adjusting to the new look and thinking about getting some of those funky feather clips, to lay down my neck ☺

I’m making it my mission in life “to not merely survive, but to thrive: And to do so with some passion, compassion, humour and style” (Maya Angelou)